In 1334 the Carthusians founded an abbey or Certosa outside the walls of Bologna. It flourished until 1796 when Napoleon Bonaparte’s army arrived, a republic was established and all monasteries were abolished.

Being at some distance from the city, the monastery lay empty until 1801 when the city decided to establish a new cemetery, known as “La Certosa” using the monastery buildings. Since then it’s expanded steadily to its current extensive size.

Like many monastery churches it has a wooden choir decorated with inlay.

The choir was rebuilt in 1538 as the original was destroyed by mutinous Landsknecht troops of Charles V on their way to sack Rome.

Unusually for the time, the church includes a painting from the 17th century by a female artist, Elisabetta Sirani whose father also has works in the church. She was quite famous as an artist but died in mysterious circumstances at just 27 years of age (see my post  On the trail of Elisabetta Sirani – A Bolognese Prodigy ).

In 1869, work in the cemetery uncovered an Etruscan necropolis from around the 6th century BC comprising some 417 tombs.

The finds, including the so called ‘Situla della Certosa’ are now housed in the Bologna Archeological Museum. A situla is a bucket shaped vessel. For more on the Etruscans, see a previous post The Etruscans and Bologna .  It’s intriguing that the location chosen for a cemetery was used for that same purpose some 2,400 years earlier.

The Certosa became quite well known in the 19th century and was often part of the Grand Tour of Europe. Dickens, Byron, Stendhal and others wrote about their visit to the Certosa. 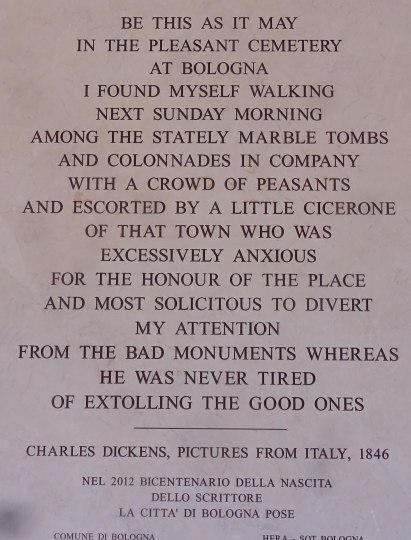 Following is a selection of what you’ll see wandering around the grounds.

Many of the early tombs were decorated with paintings. Egyptian themes became fashionable after Napoleon’s conquest of that country in 1798.

The Trionfi Pepoli tomb from 1823 was originally built to commemorate Geltrude Trionfi who died at aged 30. It was designed by Giovanni Putti.

This is the 1864 tomb of Letizia Pepoli, known as the ‘Queen of Bologna’ . She wanted it to be a monument to her father, Joachim Murat, at one time King of Naples. Her mother was Carolina Bonaparte, a younger sister of Napoleon. Murat was buried in a mass grave after being executed by firing squad following Napoleon’s defeat and his attempt to continue fighting. It’s the work of Vincenzo Vela.

Dating from 1868, this is an early example of ‘bourgeois realism’ by Carlo Monari and is the tomb of an 18 year old.

This work by Enrico Barberi from 1891 was commissioned by Erminia Borghi Mamo, an internationally famous singer. She is shown kneeling by the body her husband, Raffaele Bisteghi.

Also from 1891 this large stone tomb, the work of Attilio Muggia and Diego Sarti, features a small winged Mercury oblivious to the grieving figure below.

Carlo Rizzoli designed this art nouveau work in 1906 for the Magnani family.

A 1950 memorial to Fabio Frassetto, an anthropology professor who passed away in 1933, also remembers his son Flavio who was killed in 1945 on military service.

Bologna mayor Ennio Gnudi’s resting place is marked by this 1951 marble sarcophagus carried by six workers representing his life as a union official.

Around 1960, the artist Enzo Pasqualini produced this angel flying above the Veronesi family tomb.

Probably the easiest way to get to the Certosa is to walk down Via San Felice almost to its end, past the historic pharmacy (  Farmacia Toschi – an Ancient Bolognese Pharmacy ) Turn left to follow Via della Grada to the point where the Reno Canal enters the city, next to the church which contains Saint Valentine’s body, as described in another post The Walls of Bologna

After crossing the main road follow Via Sabatina going slightly left at the lights and following the bike path. This will bring you to the point where the canal reappears and a little later to the back entrance of the Certosa . It’s about a 3km walk.

If you prefer public transport, the number 26 bus leaves from the railway station and has its terminus at the Certosa. There’s a bus about every 20 minutes through the day.

The colonnade in the image above eventually joins the one going up to San Luca.

The Certosa Office near the main entrance has free maps of the cemetery which is very useful as it’s easy to get lost. 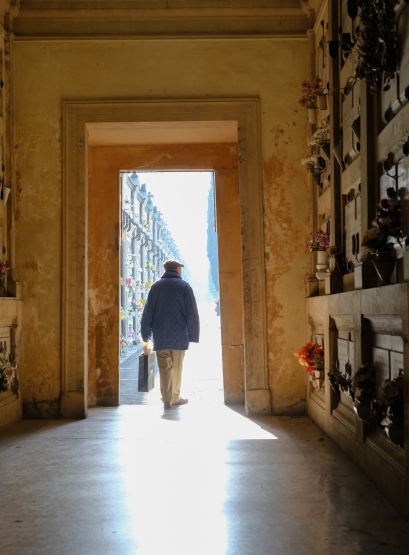 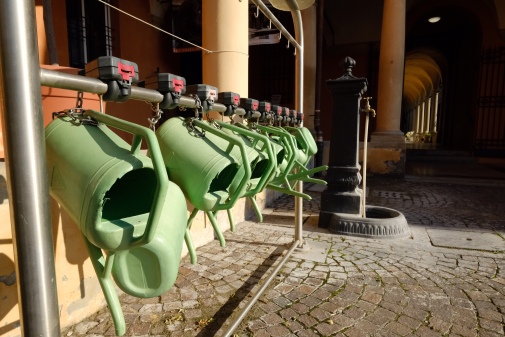