The small town of Faenza is one of ancient origins. It’s located about 55km south east of Bologna along the route of the Roman Via Emilia. Being so close, a side trip from Bologna is very easy and quick with a train trip taking just under 40 minutes.

Faenza is well known for its ceramics. The word ‘faience’, derived from the town’s name, entered the English language via French in the late 17th century. An essential part of your visit to the town should be the  International Museum of Ceramics.

You can’t miss the museum if you arrive by train as it’s on the main road, Viale Baccarini, heading from the railway station into the centre.

A significant section of the collection focuses on Italian ceramics. The images below show typical majolica ceramics. This style flourished between the 15th and 17th centuries. A wider range of colours and decoration came into use compared to earlier periods. Human figures started to be depicted as opposed to earlier simple decoration.

The collection continues through the centuries to the modern age. The Art Nouveau plate below on the left is by the noted Faenza artist Achille Calzi. 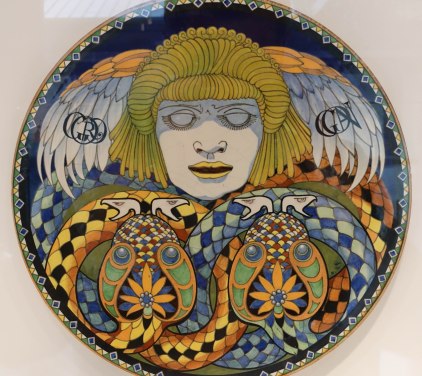 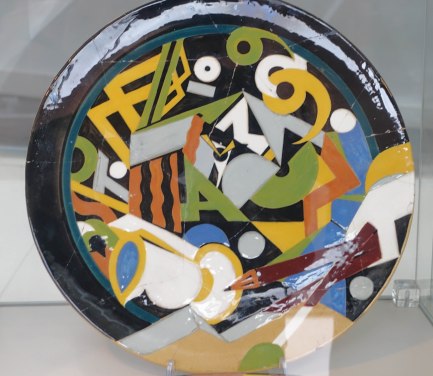 The museum also has exhibits covering many other areas such as pre-Columbian, Ancient Near East, Islamic and Far East ceramics.

The manufacture of ceramics is very much alive in Faenza, and there are numerous shops where you can buy a ceramic souvenir. The “garafono” or carnation pattern remains a popular one.

Another interesting place to visit in Faenza is the late 18th century Palazzo Milzetti . Following earthquake damage in 1781, the building was remodelled in the then fashionable neo-classical style.

As is often the case in Italy, an unassuming exterior belies an extravagant and beautiful interior. The “Feast Hall” shown below is a typical room, decorated with real and false bas-reliefs. This room is also known as “Achille’s Hall” as there are scenes from the Iliad depicted in two lunettes.

Some of the decorations such as in the bedroom are reminiscent of the ancient Roman frescoes . There are also some original furnishings such as the bed and chair shown below. 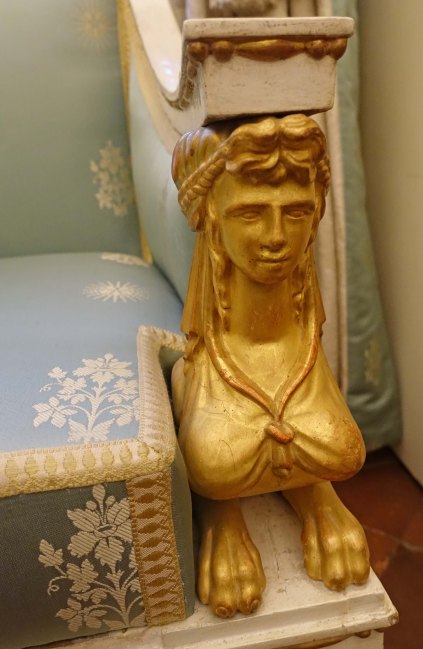 Detail of a chair.

You can even visit the kitchen.

A wander around the streets of Faenza will round off your visit. When we visited, the town was very quiet and few restaurants were open for lunch.  It was a cold wet day and I’m sure things are much livelier in the summer.

If you’re looking for a quick side trip from Bologna, Faenza is an interesting option to consider.