The area around Bologna’s Piazza Maggiore has been the centre of the city at least from Roman times when the forum was located here. The Roman ruins you can visit under the Sala Borsa library include those of the basilica, the centre of civic life. For more on this topic, please see my post  Ancient Roman Bologna.

Today the area is still a hive of activity. It’s used for events such as the summer open air cinema, community sports events and various festivals. However many visitors sitting enjoying their spritzes are unaware of a number of interesting historical curiosities around Piazza Maggiore and the adjoining Piazza Nettuno.

1. The Statue of Pope Gregory 13th

Prominent in the square is the statue of the Bologna born Ugo Boncompagni, who became Pope Gregory the 13th. Today he’s mainly remembered through the Gregorian Calendar which he instigated and which still forms the basis of the modern calendar. You can visit his birth place on a tour of Bologna’s towers – see my post The Towers of Bologna . The bronze statue was completed in 1580 by the Bolognese sculptor Alessandro Menganti.

In 1796, a French army under the command of a young Napoleon Buonaparte invaded Italy. The Bolognese were fearful for the future of the statue as the French revolutionaries hated the papacy and were also melting down bronze items to facilitate the manufacture of cannons needed for the war.

To protect the statue, the stone inscription was changed to say the statue was of San Petronio, the city’s patron. The Pope’s tiara was replaced by a bishop’s mitre and a crosier or staff placed in his hand.

The statue survived and some 100 years later returned to its original state. However the changed and incorrect inscription remains to this day.

Before the Napoleonic era and the gradual implementation of the metric system in Europe, there were many local measures in use.

This piece of stonework from the 14th century records the standards in Bologna for lengths and and a few other items.

The longest length measure at bottom right was the “pêrdga” in Bolognese, la pertica in Italian or perch in English. This was 10 feet, or “pà” , in length or 3.8 metres. The perch was used for land measure across Europe. The British perch was longer at 5 1/2 yards, or just over 5 metres.

The shortest measure above it at the right is the pà, piede or foot at 380mm. The Italian piede was a bit longer than the Imperial foot which is officially defined as 304.8mm. The next longest is the brâz or braccio derived from the Roman passus (630mm). This measure is related to the ancient cubit. The last is the double of this, the brâz dåppi or doppio braccio.

At the left are two other measures.

To the right on the same wall as the standard measures described above, and adjacent to the Statue of Neptune, is a pair of eagles.

They are positioned below a window thought to be the work of the 16th century sculptor Galeazzo Alessi. 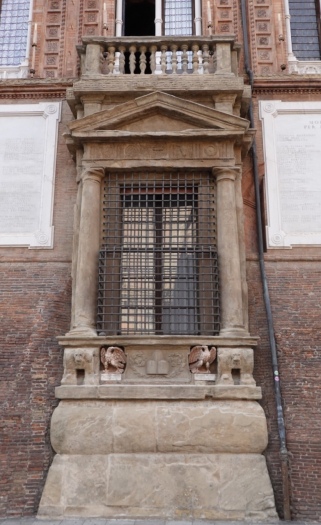 The inscription under the eagles refers to the Papal Vice-legate Girolamo Sauli who ruled Bologna in the Pope’s name in the 1550s.

The eagle on the left is often attributed to a young Michelangelo Buonarotti, whilst the one on the right to Niccolò dell’Arca. My post Michelangelo in Bologna gives some further detail on the relationship between these two artists in Bologna.

This eagle is often attributed to Michelangelo.

This eagle is frequently attributed to Niccolò dell’Arca and unfavourably compared to its twin.

Further, some commentators compare the eagle attributed to Niccolò quite unfavourably to Michelangelo’s.

However, these attributions are subject to some controversy. Some commentators, for example, refer to the complete lack of any mention of the eagles by well known experts in Bolognese art in centuries gone by.

Passing through the central arch to the right of the Tourism Office and looking up, you’ll see these irons.

The area had already been used for executions for centuries, when in the year 1604, these iron braces were installed to facilitate the hanging of condemned criminals.

The story goes that on the occasion of the inaugural hanging using the new braces, the condemned Domenico Grundi made a run for it but was quickly captured. The executioner strangled him with his bare hands, much to the chagrin of the assembled crowd who missed out on their entertainment.

Having contemplated the place of execution, if you continue down the corridor, you will come to an intersection with another corridor. At the four corners are statues of San Petronio, San Procolo, San Domenico and San Francesco, modelled in 1525 by Alfonso Lombardi.

The ellipsoid shape of the vaulted dome allows the transmission of  “whispering-gallery waves”, a phenomenon first studied in St. Paul’s Cathedral in London.

The whispered speech of someone standing in a corner facing the wall can be heard by a partner standing in a similar position in the opposite corner.

Heading back out into Piazza Maggiore and turning to the left of San Petronio. We come to the Portico del Pavaglione. The word pavaglione is related to the English pavilion and derives from the Latin papilo meaning butterfly. Whilst many sources say the derivation of the name of the structure here in Bologna relates to its use as a silk market, the word probably harks back to large military tents that resembled butterflies.

Turning to the right and following the portico, there’s a long section where the pavement is made from the stone “Rosso Verona”. Whilst commonly called a marble, strictly speaking it’s nodular fossiliferous limestone.

Some 130 million years ago, much of northern Italy was covered by ocean. As a result of the formation of Italy’s mountains, the limestone, along with fossilised ammonites, is found far from sea level at between 309 and 1,000 metres. It’s been mined for millennia.

Without causing pedestrian chaos, see if you can spot the characteristic spirals of the ammonite fossils under your feet. 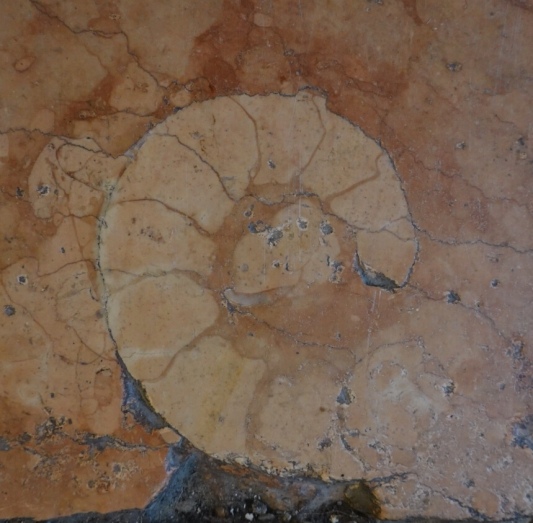 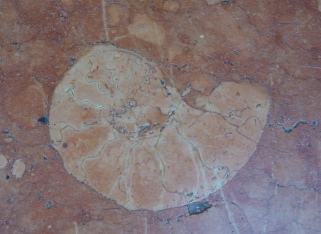 A fossil ammonite in the pavement – Bologna Portico del Pavaglione.

You’ll be able to spot more of these around the city where this type of stone has been used.

As you walk down the Portico del Pavaglione, you’ll pass the Archaeological Museum, as well as the Archiginnasio which was built in the 16th century to allow all University schools to be co-located.

From the 14th century, there was an “Ospedale” at the location of the Museum. In the middle ages, an ospedale served numerous purposes. An indication of this is that the English words hospice, hostel and hospital all derive from the same medieval term.

The L’Ospedale della Morte, or Hospital of the Dead, was run by a confraternity of flagellants, the “Arciconfraternita di Santa Maria della Morte”. They cared for prisoners and those condemned to death, as well as the acutely ill. The location was handy for medical students from the nearby University Archiginnasio as they utilised the dead bodies for anatomical study.

The ospedale and associated church, Santa Maria della Morte or Saint Mary of Death, no longer exist, the order being suppressed in 1798 during the period of Napoleonic rule. However at the corner of Via Foscerari you can still see an ancient plaque bearing the confraternity coat of arms.

The coat of arms of the Ospedale della Morte.

It features the whips used by the flagellant monks as well as symbols of death.

Nearby was another flagellant confraternity called the Battuti Bianchi who also ran an ospedale. However theirs was for the care of the infirm and pilgrims. Their church, Santa Maria della Vita, or Saint Mary of Life, still stands in Via Clavature.

The adjacent Via de’Musei was once called Via della Morte and runs around past the portico of the Ospedale della Morte back to the Pavaglione.

Here’s a map showing the location of each of the items in this post.