One of the pleasures of visiting Bologna is walking for kilometres under its porticos. In fact Bologna has over 38km of porticos within the line of the last set of walls (see a previous post The Walls of Bologna ) and another 53 kilometres outside the walls. It has by far the longest set of porticos in Europe.

The origin of the porticos lies in the medieval practice of extending buildings out over streets to gain more living space.  These extensions, called jetties in English,  can be seen all over Europe.

In Bologna, rapid growth in the city driven by factors such as the revival of commerce and burgeoning university student numbers in the 11th century and after drove this phenomenon. These extensions became larger over time, requiring more substantial supports called sporti and beccatelli in Italian. A good example from the 13th century can be seen in Via Clavature.

Overhanging building extensions eventually grew in size to the point where it was necessary to provide vertical columns to support them, thus forming a covered walkway underneath. These covered spaces were useful for commerce and craft activities.

In most European cities, this interference with public walkways was eventually prohibited or restricted. However in Bologna, the Comune or Town Council took a different direction.

In the 13th century, the Comune became responsible for the maintenance of porticos which had previously been regarded as private property. From 1288, where considered useful all new buildings were required to have a portico in stone or brick, which was regarded as a public thoroughfare. The height and width were both to be a minimum of 6 Bolognese feet or around 2.66 metres. This allowed passage of a person and a horse.

Later legislation required existing wooden porticos to be replaced. However a number have managed to survive the centuries. These include those in Via Marsala pictured above and Casa Azzoguidi in Via San Niccolo’ with its attractive decoration seen in the images below.

Casa Azzoguidi in Via San Niccolo’.

Detail on the Casa Azzoguidi Portico.

One of the most famous medieval wooden survivors is the improbable Casa Isolani in Strada Maggiore. The portico is around 9 meters high and was built sometime around the year 1250.

Here you’ll often see people craning their necks upwards. They’re trying to spot one or more of the three arrows imbedded in the wood above.

The legend surrounding these arrows is that a nobleman employed three assassins to murder his unfaithful wife. Seeing them below from a window, she dropped her gown to show herself naked. Distracted, their arrows flew wide. However it seems that a workman involved in a 19th century restoration placed them there as a joke.

Another example is the pretty little ex-orphanage of San Leonardo in Via Begatto with the original wood and additional brick supports.

In the area around Via Santa Cristina you can find simple working class porticos without ornamentation dating back to the 14th century. Nearby Via Senzanome has the narrowest portico of Bologna at just 95cm wide.

At the other end of the spectrum, Bologna’s widest portico is that of Santa Maria dei Servi which was commenced in 1393 but not completed until 1855.

The highest portico at 10 metres is that of the Palazzo of the Archdiocese of Bologna in Via Altabella.

Wandering around Bologna you will see a mix of styles of portico including Renaissance, Gothic, Romanesque and Modern. You will also see some buildings without porticos. Many of these are the large Renaissance homes of the wealthy who were able to flout the regulations to build in the fashionable “Roman Style”.

One of the most interesting porticos is that of the Renaissance Palazzo Bolognini Amorini Salina in Piazza Santo Stefano ( see Santo Stefano – Bologna’s Mystical Past ). This portico is decorated with terracotta capricci style busts from the 16th century. However the busts on the right of the facade date from the final completion of the building in the 19th century. 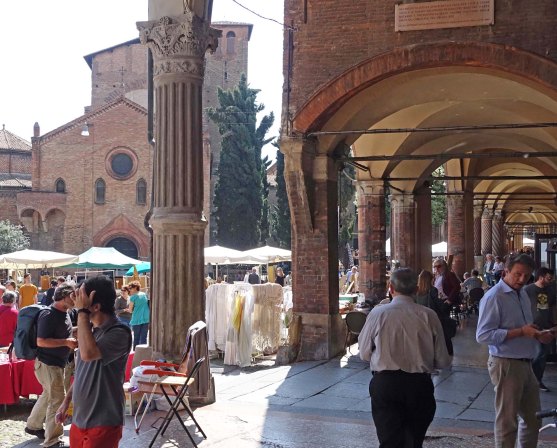 The portico which stretches from Porta Saragossa up to the basilica of San Luca (see my post The Descent of the Madonna of San Luca  ) was constructed between 1674 and 1721. At 3.8km it’s the world’s longest portico. This is an obligatory walk for visitors to the city!

A branch of the San Luca portico leads down to the Certosa Cemetery (described in my post The Certosa of Bologna ).

Inclusion of porticos in building design continued into modern times. Here are examples from the 19th and 20th centuries. 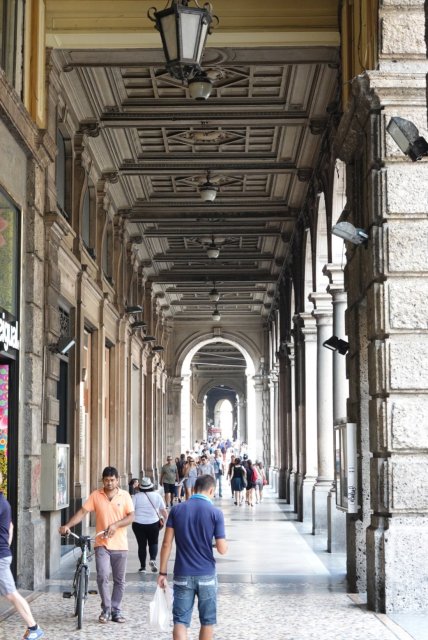 The porticos of Bologna have been nominated for  World Heritage listing .

Any visit to the city is enhanced by the foresight of the Comune all those centuries ago in deciding to make the provision of porticos obligatory. Find yourself a nice bar or restaurant located in a portico and sit and watch the world go by!