Founded by the Etruscans roughly 2,500 years ago as “Velzna” (see my post The Etruscans and Bologna), Bologna fell under control of the Gallic Boi tribe before finally becoming the Roman “Bononia” in the early second century BC. It grew into a thriving municipium, giving Roman citizenship to its free inhabitants in 88BC.

But what remains today of Roman Bologna? Unlike the medieval city (see for example my posts The Walls of Bologna or The Towers of Bologna ), the Roman city is more hidden away and far less of it has survived. Many remains are located in private property, often in cellars. However, there are locations that can be visited.

The largest reminders of Roman times are not immediately obvious ones.

If you arrive or leave by air, you may get a view of extremely regularly ordered fields around the city.

The Romans followed a very structured method of dividing up land into centuria, which measured around 125 acres, still visible from the air.  The practice grew out of the division of land for returned soldiers and this was the area commonly given to 100 soldiers.

Roman towns were also usually constructed on a grid pattern. A North-South street was called a cardo whilst an East- West thoroughfare was a decumanus. Central Bologna’s streets still reflect the Roman layout.

The main streets in a Roman town were the decumanus maximus and the cardo maximus. In Bologna, these are today’s Via Ugo Bassi and Via Rizzoli, and  Via Galliera and Via Val d’Aposa respectively.

Strada Maggiore is actually part of the Via Emilia built by the Romans around 187BC. It ran from Rimini on the coast to Piacenza, a distance of 176 Roman miles or 260km.

You’ll notice how Via Maggiore, a part of the Via Emilia and shown in blue in the diagram above , meets Via Rizzoli at an angle next to the two towers. The same thing can be seen at the beginning of Via San Felice which is the continuation of the Via Emilia to the west. This is because the Via Emilia was built after the streets of Bologna were laid out and they don’t quite align.

In many places, the Roman street lies not far below the modern road surface. A few years ago during road works, Roman street paving just below the surface of Via Ugo Bassi was exposed for a few months

Just below the surface of Bologna’s Via Ugo Bassi lies the Roman street.

A carriage wheel rut in the Roman street surface under Via Hugo Bassi.

In the second image, you can see the rut marks made by carriage wheels.

There are a few places in Bologna where you can see exposed Roman street surfaces. If you walk down Via de’ Pignattari, which is the street just to the right of the Basilica of San Petronio in Piazza Maggiore, towards the rear of the church you’ll find an excavation with a see through cover. Well below the level of the street is a small section of Roman street and two mosaic panels.

Inside the Museum of the History of Bologna at 7 Via Castiglione there is a section of basalt street surface taken from Via Rizzoli.

If you happen to be in the Grand Hotel Majestic, perhaps for a meal at the excellent “I Carraci” Restaurant, pop down to the basement bathroom to get a view of a section of Roman street, a minor decumanus. It’s now well below the level of today’s Via Manzoni.

If instead you’re dining at another excellent restaurant, the closeby “Buca Manzoni”, you’ll also find traces of Roman ruins at the rear.

The Roman Forum was located at the intersection of the two main streets, the decumanus maximus,  and the cardo maximus. This is now Bologna’s Piazza Maggiore.  Near here you’ll find the most extensive of Bologna’s Roman ruins, which are of the basilica, built in the first century BC. In Ancient Roman times, the basilica was a centrally located large building where business and legal matters were transacted.

Significant remains of Bologna’s Roman theatre dating from around 88BC remain, however they are inside a privately owned 18th century building at Via de’ Carbonesi 5c. Work was completed in 1977 to expose much of the ruins and the area later was in use as a department store. Unfortunately it’s been closed now for some 20 years but there are plans for development.

Images of the theatre remains which were integrated with a COIN Department Store from 1994 can be seen here . At the time of writing this post in early 2020, guided tours were being offered regularly. Check this site  for details.

The beautiful Santo Stefano complex (see my post Santo Stefano – Bologna’s Mystical Past) includes the circular church of Santo Sepolcro. This is thought to have been a baptistry in the fifth century and built on the site of a Roman temple to the goddess Isis. A stone plaque mentioning Isis dating from the early Roman Imperial period was found nearby. You can see it mounted on the wall in the garden in front of the church.

Inside is a circle of seven cippolino marble columns dating from a similar period, supplemented by more recent columns. These were added to replace brickwork used to repair damage caused by marauding Huns in the 9th century. There’s also a separate black marble column of north African origin. 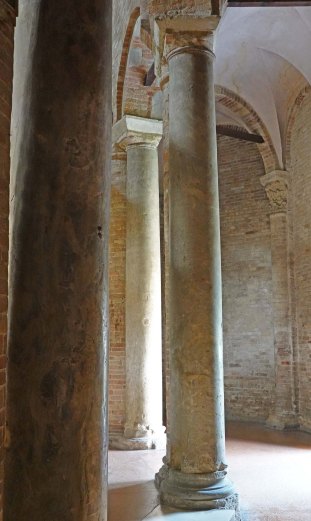 In the adjacent Church of Saints Vitale and Agricola, one of the columns has an Ionic capital, thought to have once been located in the Basilica.

You’ll find another church dedicated to these saints called ‘Santi Vitale and Agricola in Arena’ at 50 Via San Vitale. This is built on the site of the Roman arena where tradition has it these two saints were martyred in the reign of Diocletian.

There are various pieces of stonework in the crypt that very likely formed part of the Roman arena. Some are on display.

A carved stone from the Roman Arena.

A stone probably from the Roman Arena.

Bologna’s Archeological Museum has a collection of some 4,000 ancient Roman objects, many of them reflecting daily life.

A Roman Olla or jar from the first or second century AD. (Bologna Archaeological Museum, Wikimedia).

One of the most famous Roman pieces is a torso of the Emperor Nero, found near the site of the Roman Theatre in Via de’ Carbonesi.

Nero convinced the Senate to fund the reconstruction of Bononia after disastrous fire ravaged the city in the year 53AD.

My research for this post has been interrupted by COVID-19 restrictions on travel. There are a few more locations which I have yet to investigate. I’ll update the post when possible.

Amongst the most spectacular of Roman ruins are the large scale remains of aqueducts scattered around the area encompassed by the Roman Empire. However, not all aqueducts were built above ground. Few visitors realise that Bologna still has a functioning underground Roman aqueduct.

It was built around the year 27BC and carries water over a distance of 18km from near the town of Sasso Marconi to Bologna. Its route passes under the hill surmounted by the Basilica of San Luca. The aqueduct was forgotten for some 1,500 years after it fell into disrepair.  It was rediscovered and put back into operation in 1881 and still supplies a part of Bologna’s water supply.

Occasionally tours are conducted from Sasso Marconi but you would need to search the internet for possible tours well ahead of the time of your visit and have suitable clothing and rubber boots.

Enjoy seeking out these memories of ancient Rome on your walks around Bologna.